cindy lou who & the grinch 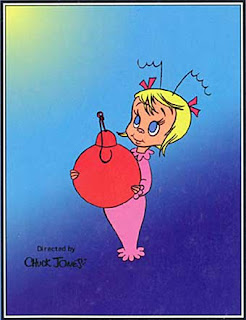 sometime in february, several months and a hundred or so readings into "how the grinch stole christmas", i told eva that if she still loved cindy lou who that much when it got to be halloween, that i would make her a cindy lou who costume. she was thrilled. shortly after hazel was born, she suggested that she could be the grinch. and somehow or other, baby cousin lilly ended up as max the dog.

the cindy lou who costume consisted of a wig hat, a pink dress, and a giant christmas ball.

the pink dress was made of pink costume fur -- for added warmth, since we're visiting in the north for halloween, and there's nothing worse for a kid than being forced to wear a winter coat over one's costume. the dress is loosely based on a pattern for a nightgown with a raglan sleeve (butterick #4910). i added scallops at the neck, sleeve, and hem, and stuffed them with scrap fabric to make them cartoonishly puffy. the hem was tapered, but i couldn't taper it in completely around her feet, obviously. i fashioned what amounts to a puffy apron to tie around her waist under the dress to add to the effect by widening the dress around her middle.

the wig hat (as i've come to call it) is crocheted out of bernat glow in the dark yellow yarn. i thought i was worth a try -- and especially for halloween -- but i'm not overly impressed. the yarn has a pretty awful texture, and you can't discern much of a glow, unless you charge it up directly under a light then immediately head to a very dark room. but, it was enough to entertain her, so i guess it was worth it. i basically shaped a regular crocheted hat, then added extra rows down the back to make it approximate her hairline. i made separate triangular pieces that i attached around the front hairline to look like locks of hair, and added a few chains of stitches to fill it out. cindy lou who has little red hair bows, and as the last fun detail, squiggly seuss-style antennae. i formed one pipe cleaner (ahem, excuse me, they're now known as "chenille stems") in to a circle, then attached the antennae and poked them through the wig from the underneath. they stayed standing upright perfectly with this method.

the red ball... well, we were planning to make one from scratch, but happily, we found a giant novelty (shatterproof) christmas bulb at a local home improvement store. hurray for the christmas creep that puts christmas decorations within my grasp prior to halloween! (eek.) all i had to do was add the little topper part and the seussian hook. that consisted of a painted small plastic food storage container and more pipe cleaners. 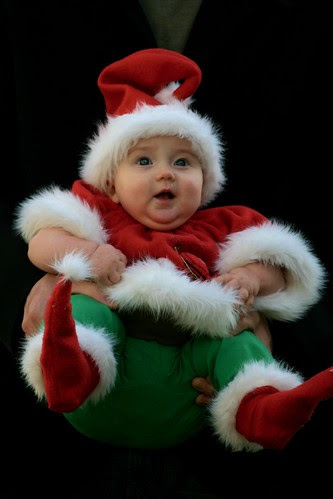 and for the grinch... oh, the grinch. you can't very well paint a baby's face green, nor can you give her green furry gloves that she'll just eat. so as a result, she mostly looked like a tiny somewhat demented christmas elf, i'd say. but, whatever it was, it was plenty cute. the coat was a tiny, shorter version of the same basic pattern i used for the cindy dress. the hat and shoes were just quickly mocked up, and on the third try, i actually made the shoes big enough for my baby's chubby feet and ankles! 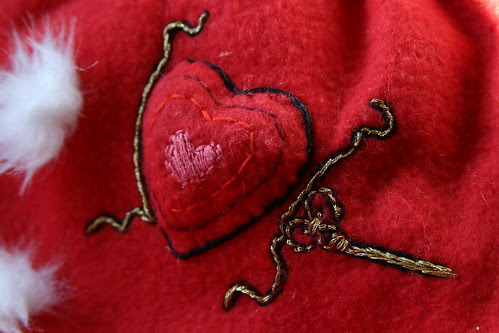 to minimize future angst along the lines of "oh sure, i had to be the grinch for my first halloween!", i was sure to make her the happy grinch from the end of the story, the one after his heart grew three sizes. thus the embroidered detail of the heart that grew so big that it broke right through the fancy gold measuring device (i based this off a screen shot from the movie). 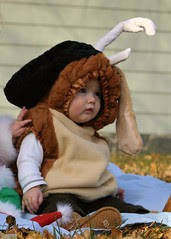 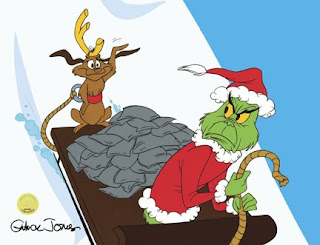 and speaking of future therapy bills, my baby niece lilly looked very cute as max the dog. my sister bought her a dog costume, and i fashioned a reindeer horn (with what inside? more pipe cleaners, of course!). 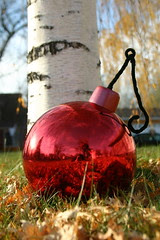 like usual, i went a little more nuts than i intended. but i will always make my kids homemade halloween costumes, for as long as they want me to do so. eva was so very pleased, her face just lit up when she finally saw the completed costume. (though not so much in the photo below... this was taken the day after, when the sugar high had dissolved into a massive cranky sugar crash. :) 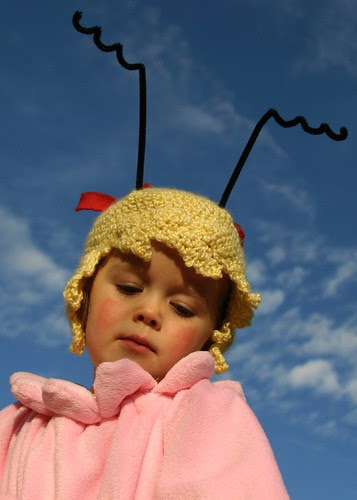 OH...MY...GAWD! you deserve something more than feeling good for that. awesome!

WOW!! How inventive and responsive to Eva. The constumes are cute and so are the kids.
From Auntie
Ruthie

Looking great! Your creative juices are flowing strong. I was lucky enough to see the kids in their actual costumes. I enjoyed the pictures and reading the story. Auntie Sue

That is the cutest costume ever! Maybe next year I'll get it together enough to make my little one's costume. This was only her 2nd Halloween so she's still in the too-little-to-notice stage so I don't feel too bad. Still, your costumes are amazing and Halloween would be much more fun if I spent the time to create cool costumes!

Those are the best costumes EVER. I am SO SUPER impressed! WOW.

I make my kids costumes too... yours came out great! Love little Cindy Lou. Great blog!

I am in love with this costume and really want to make it or have someone make it for my daughter. Do you make costumes for sale? Do you have a pattern for this costume? Any help you can offer me would be great!

You do such great stuff. Love all the ideas. :)

I don't make costumes for sale, but I am happy to answer questions about it. I just reread the info I gave on how I made it, and I'm guessing it's not all terribly clear, is it?

The main points are that I started with a raglan sleeve nightgown pattern and adjusted from there for the dress. The "wig" is basically a crocheted hat with the shape altered somewhat to cover her whole hairline. Pretty much everything else was done with pipe cleaners, they're so handy. :)

I think someone with average or better sewing skills could do it for you without much trouble. If you have questions on specific aspects of it, I'll do my best to answer.

And if you do it, you absolutely have to come back and post links to photos! :)

So cute! I'm linking to your post because of your awesome Cindy Lou hat... from croqzine.com

LOVE your Cindy Lou who costume! We have joked for a year + now that my 2 y.o. daughter looks like Cindy Lou who and I would love to make this for her for a Christmas picture while she is still little! I have never learned to sew but am trying to find some lessons! In the meantime I am going to try to enlist some sewing help to make this! Thank you for sharing!!

People say my daughter looks like Cindy Lou Who, and that costume is DARLING!!!!!!!!!!

Hi Kristy, I came across your blog looking for ideas of how to make my daughter's Cindy Lou Who costume for Halloween this year. I absolutely love this one you made and was wondering if by chance you still have it and would like to sell it? If so, please e-mail me at kottsick@yahoo.com. Thanks so much! Rebecca

Would you make that embroidered Grinch's heart (3 sizes, busting out of frame) for sale? Do you have an etsy shop?

I have no sewing skills what-so-ever but love that image of the heart growing growing growing!
All through my young daughter's infancy - toddler > now preschool growth, I've felt my heart just bursting and would like something like that as a keepsake.

Your rendition is the most charming!