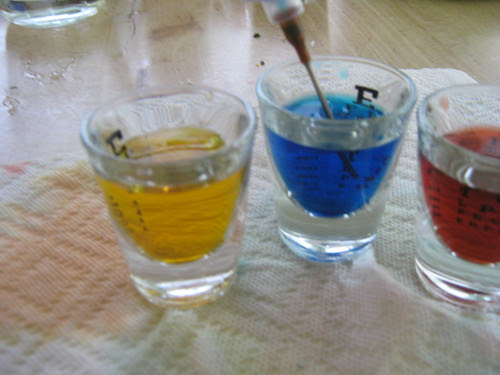 i don't find much time for crafting with a preschooler and (not-so-)newborn in the house, thus the dramatic slow-down in posting the past three months. today, though, we did a bit of kid crafting that i wanted to share. not quite a guest blogger post, but a collaborative effort to be sure: not only is the artwork eva's, but she took all the photos as well (she got her own camera for her third birthday, complete with her own flickr site -- have i gone off the deep end?). 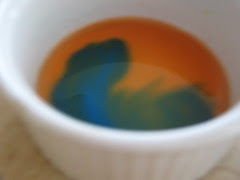 we started out by playing around with food coloring and water, as suggested by a fellow mama. as you can see, we decided to start with the three primary colors in "tiny" (ahem, shot) glasses and go from there. we worked out things like what colors you need to make green, what you get if you mix red and yellow, and that no matter how many times you try it, mixing all three will give you a version of brown. ("how about if we add blue to the orange we just made? oh, look, that makes brown too, mama!")

we used a syringe to suck up water and mix it in a small white bowl (the needle-less syringe i happened to have lying around was a marinade injector. why? because my sister is a foodie, that's why. normal people can use a dropper from a craft or teacher supply store). from there, the new color went back into the syringe to be placed on our medium -- first, a paper towel. (the original idea was to use coffee filters, which would be great, but we didn't have any handy.) the colors bled and mixed in cool ways, and being a paper towel, it soaked up enough of the water to prevent a huge mess. we even made a duplicate "print" of the original by pressing a second paper towel onto the first. neat. 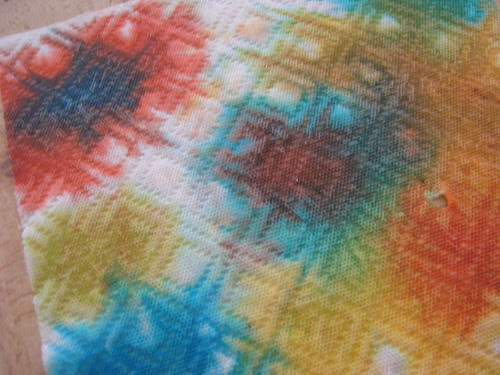 next, we tried doing a modified tie-dye: i rolled up an old tea towel and bound it with twist ties and rubber bands to make a "caterpillar" shape. eva placed different colors along the caterpillar, then we unrolled it to see the design. this is a somewhat ephemeral project, as my understanding is that you can't permanently dye cotton with food coloring (maybe next time, we'll try kool-aid?). i may try heat setting it with an iron -- still won't be washable, but might be good enough that i can let her use it for her toy kitchen without worrying that it will stain the carpet. 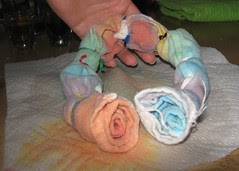 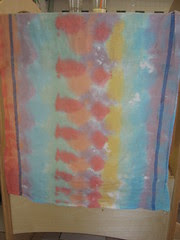 now, since this is eva's project, here is the method in her own words in a 17-second-long video, which she recorded herself with her camera. (it's only her third (or so) video, so you can hear me telling her how to turn it off at the end. :)

[caption: "mom, we used this colored water, and we used "play water", and we put it on that cloth right there. with twist ties and rubber bands."]

this isn't earth-shattering stuff of course, but we sure enjoyed ourselves. and with minimal set-up/clean-up, we did the whole thing while baby hazel slept. perfect for our rainy afternoon!
Posted by Kristy at 4:36 PM 2 comments: Links to this post