I'm not exactly the cheerleader type. I was once a cheerleader, though -- in sixth grade, my first year in a new town, I (along with every other girl in the class save one) tried out for next year's jr. high squad. Unfortunately for me, my cheering older sister had taught me enough that I made the squad, only to find that it just wasn't my thing. I think I ended up feigning illness many Saturdays, and the squad alternate ended up cheering more games than I did. (Granted, that wasn't a terribly mature way to handle the situation... but that's kind of the definition of being in seventh grade, I think.)

Well, my daughter saw pompoms on TV, and declared that she wanted some. "How do you even know what pompoms are?" "That's just what they're called, Mom. They're pompoms." Hmm. So much for that whole plan of not indoctrinating her with immutable gender roles. Pompoms it is!

Rather than go pick some up at Target -- where they would assuredly be bright pink with pink on top and emblazoned with some distasteful licensed character -- I decided to make our own out of Target bags. That's what I had on hand (Gimme a "T"! Gimme an "A"! Gimme an "R"!...), but I think this would be really cool with some solid colored bags if you could get your hands on them. (Just last week I had a red one lying around, too bad we decided to clean up! Lesson learned. :) Here's how we did it, but I'm sure this method could be adapted in any number of ways. See what you come up with...

Materials: 7 plastic bags (for a pair of pompoms), a rotary cutter/mat/straight edge set or a scissors. That's it. You don't even need tape or a ruler. 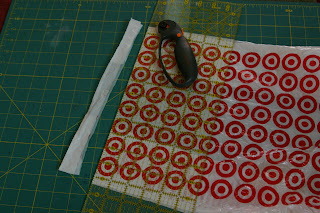 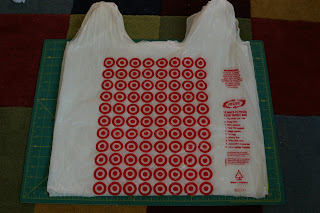 2. Open it up. Pull out the pleats and lay it flat. Fold the bag in half side-to-side. (That's optional, but folding it in half means less cutting.) I used a rotary cutter, but a scissors would work too if necessary. 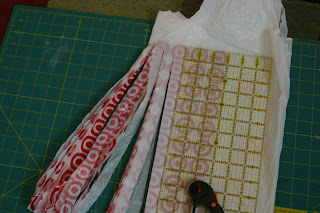 3. Cut fringe. Cut strips about 1/2" to 3/4" wide, from the bottom of the bag, stopping about 2" before you reach the top edge. The width isn't that important... don't bother measuring (but do try to keep the cuts parallel). Feel free to experiment with wider or narrower fringe, but you might not want to go too narrow unless you're using thicker plastic. 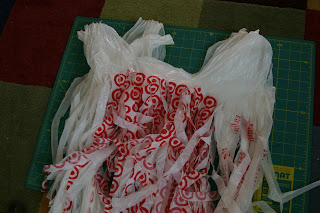 4. Snip one handle. Cut one of the handles at the top. (This photo shows multiple bags stacked up as I got into production mode, sorry if that's confusing.) 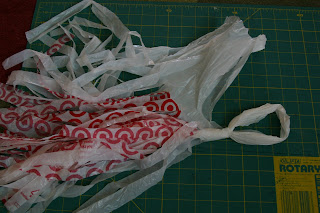 5. Roll it up. Starting from the edge with the intact handle, roll up the bag across the top edge. The snipped handle will end up on the outside of the roll. 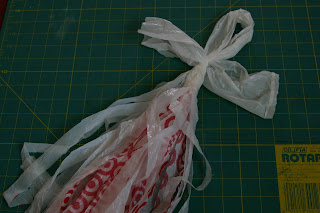 6. Pull down the outside handle. This reminds me of one of the battalion of brooms in Fantasia. Send your fledgling pompom around the room carrying a bucket of water if you like. 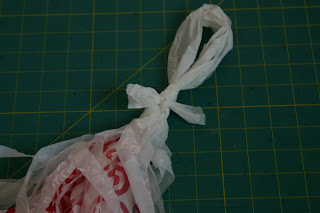 7. Tie it up. Use that snipped handle to secure the roll-up. Wrap the two ends around the rolled-up area a time or two, tie off, and trim off the extra (photo was taken before I trimmed).

Repeat this with a total of 3 bags for each pompom you want to make. Two is a popular quantity. :) If you have bags of different colors, you could experiment with placement: roll multiple bags together to blend the colors, or group the little poms so that the center is white and outside is purple (just like my jr. high pompoms).

Next we need to make some plastic strips with which to wrap the handles -- think of it as grip tape like used on a tennis racket or hockey stick. (Or, anthropomorphized broom?) One bag yields enough "tape" for a pair of pompoms. 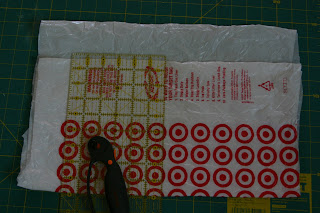 8. Create tape loops. [I'm basically following the continuous strip-cutting technique from Laughing Purple Goldfish, so you can check out her instructions if you need more photos.] If you want a contrasting color for the handles, this is the time to grab that bag.

Cut off the bottom inch of the bag and pull out the pleats (as before) to make the bag lie flat. Trim off the handles, creating a nice rectangular tube of plastic. Fold one side edge (as opposed to the trimmed top/bottom edges) almost over to the other side edge (maybe 3" shy). Starting at that newly created fold (bottom of photo), cut 2" wide strips extending nearly to the opposite edge, but leaving 2" or so connected. (I'm compressing many steps here, so if it's as confusing as I suspect it is, check out the Goldfish tutorial :) 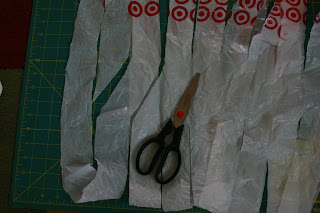 9. Turn the loops into one long strip. Open up the bag, and cut on a diagonal across the part you left connected, which makes one long strip of plastic tape. (Clear? Good.) Find the approximate middle of that very long strip, and cut it to create two pieces of tape, one for each pompom. Repeat steps 8 and 9 for each pair of pompoms you wish to make. 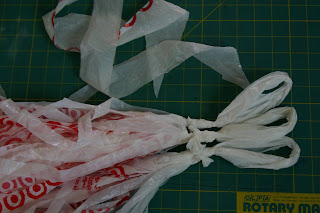 10. Prepare to wrap. Group three poms together (hey, feel free to go nuts and put like 20 together and make a mega-pom... you've got spirit, yes you do!). Tie the end of your tape around the base of the fringe, then begin wrapping up toward the handle, catching the tail of the tape underneath. 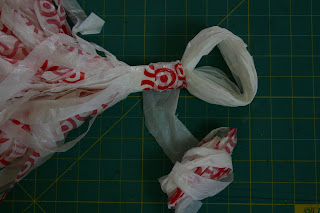 11. Keep winding. Do your best to keep the tape flat, overlapping generously (like that racket handle), but if you're not too bothered about it, you can just let the tape twist up into a rope as you wind. Just depends on how much you want to be concerned about it. When you get to the top (the base of the handle), start winding through the handle. 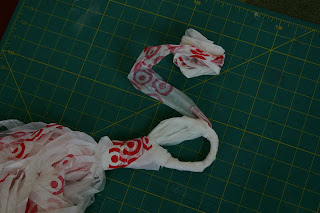 12. This part isn't so fun, but keep going. It helps if you roll the remainder of the tape into a little ball so that you can shove it through the handle (over and over) a bit more easily. Make sure you're overlapping the tape quite a lot in this part (or, if you've given up and are going for the twisted rope rather than flat tape method, keep the rope fairly snug). 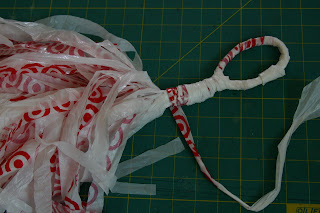 13. Finish up. Once you get around to the other side of the handle, wind back down to the base of the fringe. Tie a knot, then let the remaining length of tape blend in with the pompom fringe (trimming as necessary). 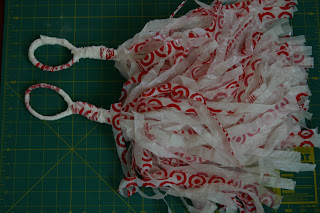 14. Rah, rah. Repeat the final assembly steps for the other pompom. Now you're ready to outwardly exhibit your enthusiasm for a whole variety of things. Rah, indeed!

I'm currently sitting on a ton of Target bags that will eventually become a Plarn experiment.

Thanks for the tutorial! These will be a great addition to our "music box" - I can see my daughter shaking these in time to the music!

ooh, i like the music idea. they do make a pretty satisfying rustling plastic sound.

I saw these on featured on the Crafty Crow & thought they were awesome! What a fun idea & great tutorial :) I am definitely making these today.