ghosts of halloween past

the one i'm most proud of is the evil knievel costume i made for larry a few years back. i based it on a commercial pattern for an elvis costume, but added the red white and blue trim (stars! oh the stars!), a belt, and a detachable cape. i put more time into it than one logically should put into a halloween constume, but once a decade or so, i think that's okay. as a result, my costume that year was a more or less no-sew project. i made a mummy bride quickly by "draping" shredded fabric over my wedding petticoat, pinning, and basting in place. the bodice is more or less tied on, and the gloves and veil are cheesecloth (in december when i wanted cheesecloth to mull some cider, i couldn't figure out what happened to the full package i knew i had just bought...oh yeah. :) (forgive the poor photo, this was several years ago...)

my sister lora and her friends are crazy about halloween. (no, really. cra-zeee.) they've done "dukes of hazzard" with tiny little cars, all the shrek characters (i think that damn cat took forever). here are a few others -- click through any photo for more info, or feel free to post a comment if want more details:

the lollipop guild (with a movie photo for reference): 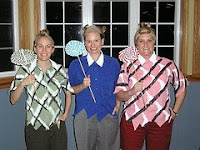 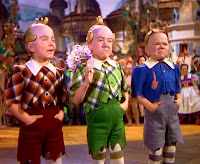 various muppets, including statler and waldorf (the old guys from the balcony), kermit the frog and miss piggy, and beaker and bunsen (shown with a friend of theirs dressed as mary catherine gallagher): oops, looks like we got the blindfold color wrong. well, i think it's also a break from complete accuracy that our princess bride was noticeably pregnant. (hmm, i don't remember that plot twist from the movie. :)

and my other favorite, the monkey costume i made for eva two years ago. she wore it for two years, because i intentionally made it large enough and basted it up the first year. she was so cute, and convincing enough that it made all the neighborhood dogs bark like crazy. :) this year, though, she's old enough to choose for herself. and sometime around february, based on her ongoing obsession, she choose cindy lou who ("who was not more than two") from the grinch. we're making it a theme, and the babies in her life (sister, cousin) will be the grinch and max the dog, and any participating grown-ups will be the whos from whoville. check back after halloween for that update.
Posted by Kristy at 8:35 PM

Wow. Above and beyond! My only forays in to costume making were in middle school, and were NOTHING like this.

This is the first year my 18 month old son will wear an actual costume. He sort of decided when he started doing a great gorilla impression when asked what a monkey says.

and eva's is so cute!
me and my friends are all going as the seven deadly sins. i'm excited to find out i'm not the only one who thinks themed costumes rock!

Fantastic monkey costume! I can also see this being useful during winter. LOL

Oh my goodness woman!!! How talented are you??? absolutely love the evil kanevil outfit and the bride but my fav is the monkey!!! you so put me to shame!!! Gorgeous kids too.